In the previous chapter we didn’t tell you that before having that marvelous breakfast we went to the beach to admire our first ever sunrise on the ocean. Could we ever miss a similar spectacle the first time we saw the ocean? ABSOLUTELY NOT!
After this great good morning we shared the breakfast with other cyclo tourist from Switzerland and New Zealand!
We spent the first our of the day talking about paths in Portugal and route to follow in other countries. To share point of view and tips it’s always a pleasure when you find such open minded people.

After breakfast we packed our things in order to start our day buuut not before a beer! We don’t know why Bruno had this amazing idea before to start pedaling but ok!
Not very healty but after all we ate it was mandatory to drink a beer! Do you agree? Yes, we know you agree! 🙂 That was what we needed! 🙂

We were leaving Casa do Adro when Idalia, the owner of the guesthouse, called and gave us a tasteful piece of chocolate cake. A little gift for our ride! Some people are just amazing!
Sometimes are the small gestures to enlight your day, and we will never forget about this. Thank you Nonna Idalia!

A quick look at the village, some photos of us and we were back on our bikes! We splitted the route in two parts: the first one from Vilanova to Porto Covo and the second one, the thoughest, from Porto Covo to Santo Andres.
The first part was quite easy, a little bit of wind but nothing really improving.
When we reached Porto Covo we thought we were in paradise. A little village and the ocean, the ocean and his amazing power. One of most magnific blue we have ever seen.
Blue and powerful. We stayed there for one hour watching the big waves and the 50 shades of blue. It was a very happy moment and the best way the take this moment to the next level
was to eat the piece of chocolate cake that Nonna Idalia gave us before our departure while we were watching this spectacle:

The second part of our day was the most incredible, the most risky, the most crazy of all the trip! First of all you have to know to know that from Sintra to Santo Andres there are no more cyclable streets. Yes, there is anything for the bikes. Yes, or rather there was a cycle path. What a pity it is not viable. At a certain point the only thing you can do is to decide if to take the highway or a dirty road. Bikes can’t go on a highway, right? Of course we decided for the dirty road. At the beginning. But let’s go for step. We were at the crossroad and the highway was cyclable once upon a time. When we arrived there was a big red prohibition for bikes sign. Ok, we had the other choice and so we did. At the beginning. After 500 metres we found ourselves in a jungle! Look at the picture below:

It was a freaking jungle with the vegetation folded on itself. We dismounted from the bikes and we tried to walk but after 100 metres we had to run away from a million of hornets. It was very scary!
The result? First of all we came back at the beginning of the dirty road, we saw an house and we knocked at the door to get some info. The only thing we had were an old couple that told us to use the highway because it was the only way to reach santo andre (10 kms far).
Ok, we tried to ask for a ride, we were hoping that a person with a truck would load us and take us to our destination, but that didn’t happen. So, after 30 minutes waiting in vain we decided to take the higway! It was the very best freacking crazy thing we did. Luckily, once upon a time, it was possible to cycle in that highway and the road was large enough for the bikes! We have never pedaled so fast and so desperate. We were seeing ourselves in jail or in a very very bad situation. We pedaled for 4 km when our navy told us to exit and to take a cycleble path just along the highway. Incredible. When we took the cycle path we met other cyclist and cyclo traveller that did our same thing. We were all asking each other how is possible to do something like this, to ban the bikes from a road that was used to be cyclable and don’t give any other alternative to the people who want to move with a bike.
We continued the rest of the trip on the cyclepath and they lived happily ever after.

What to say? For sure, if you decide to pass from Santo Andre this is definitely a place where you have to stay for the night. We think is one of the best here for services and reception. We have been welcomed very well and they permitted us to leave the bikes at safe behind the reception in a locked room that only the receptionists can open! The hall was very big, there was a restaurant, a bar, a snooker table and a big swimming pool on the outside. Our room was very cozy and clean. Once arrived we soon decided what to do. We alternately took a looooong relaxing bath before to go eat something at the restaurant. We don’t know what there is on the nearby but we found the restaurant and its cakes very good!

We were really tired and the day after would be the last long ride of the trip! We decided to go to sleep early and after a good drink we were already sleeping and dreaming Dreaming of the huge amount of jam we would eat the next morning.
Night, the moment when you think about how your day has been.
We did something crazy, we were happy. It was a good day.

Thanks for reading us.
Stay tuned for the next chapter and keep pedal!
Arthur & Bruno – BikesPhilosophy 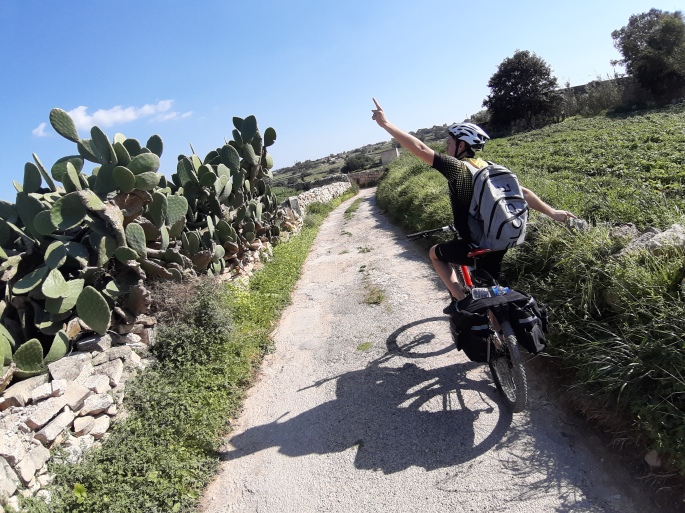 The first pic was taken when we were on our way to Blue Grotto, the other two on our way to Kalkara before visiting Marsa Scirocco and Marsa Scala.
BUT WHAT DOES IT MEAN THE TITLE? Easy, during our off road we sang this two famous song Take Me Home / Karma Chameleon mashed up convinced that was only a song.. all OK! 😀

Really close to Wied iż-Żurrieq port you can find Blue Grotto, that refers to a number of sea caverns.
Some of these caverns mirror the phosporescent colour of the underwater flora.
It is something you can’t miss. The spectacle is due to the position of the caves and the direction of the sunlight that hit the cavern walls and the sea.
In the first photo you can see an happy Arthur jumping from a table (why?) while in the other photos you can see the faboulous colour of the caves and the little oat we took to see them.

These three fortified city are very beautiful and is possible to visit them in one day.
There are narrow street that reminds you old times. It is really a pleasure to take a walk or a ride there.
These are the most historically rich, fascinating and characteristic areas of Malta.
For this reason they are inclused in the list of candidates for UNESCO World Heritage Sites.
Unfortunately these cities are visited only by 1 tourist in 10.
Why this happen? Probably due to the industry of mass tourism that concentrate everything in some places in order to maximize the profits.Guys and girls, these placese really deserve to be visited. Trust us, and if you won’t be satisfied Bruno will pay for your next trip everywhere! 🙂

How to end this day?
This is how Bruno sleeps. He is really out of mind (and this cause to Arthur a lot of problem when he try to understand him)
Another sign that he’s out of mind:
In the video you can see Bruno testing the depth of another bathroom thanks to a precise measuring instrument: his shoe!